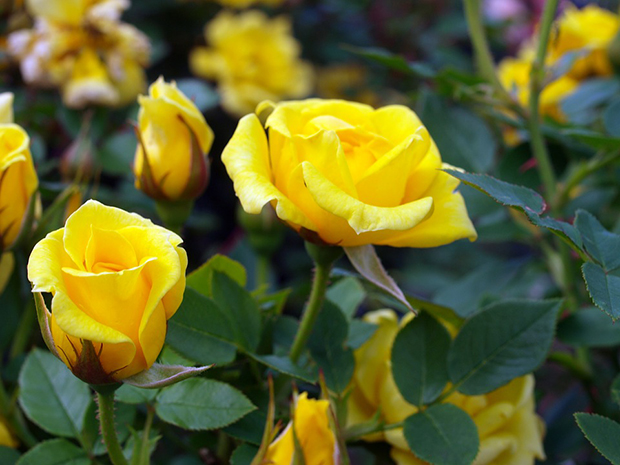 The source of all rose varieties. Producing simple, very fragrant flowers once a year in spring. True wild roses have only 5 petals and occur naturally, being native to North America, Europe and Asia.

Also a Shrub Rose, the Rugosas are exceptionally sturdy shrubs. The flowers may be single or double and are almost without exception, very fragrant. These roses are drought tolerant and require little in the way of maintenance. Disease resistant and hardy, they can be used to zones 3 and 4 without fear of loss. Perfect for a more informal landscape.

The modern roses were all bred from “Old Garden Roses”, known for their fragrance and beauty. There is great variety in Old Garden Roses. Colors range through the whites, creams, pinks, crimsons, purples, and even “Rosa Mundi” with pink and white stripes. These are the roses of old European gardens and date back to the Roman Empire.

English roses are stunningly large and beautiful with blooms that are cabbage-like in form. David Austin began cross-breeding Old Garden Roses and Modern roses with great success, culminating in a rose with the fragrance of the Old Garden Roses, but with the color range and reblooming ability of the Modern roses.  Hardy in zones 5-9.

Rose varieties not existing before 1867

Modern roses are primarily described by their ability to flower throughout a long season, typically until the first frost. The modern rose comes in almost every color except a true blue or true black.

The Hybrid Tea was the first modern rose and are the classic long-stemmed rose, with individual blooms. They are hardy in zones 4-9 and bloom repeatedly throughout the season. This is the largest group of roses.

Grandifloras have a shorter stem than the Hybrid Tea, but with clustered, large, double blossoms. They have the same hardiness zones and also bloom repeatedly. They are normally without fragrance.

Floribunda Roses
Floribundas were introduced in 1930. The original floribundas were the result of crosses of Hybrid Tea roses and an old-fashioned class of rose called Polyanthas. These are relatively compact bushes with excellent hardiness and disease resistance that produce large clusters of blooms. They are continuous bloomers and have the same color range as the Hybrid Teas. They will adapt to a wide range of soil and temperature conditions. They also work really well in containers.

Also called Landscape Roses, the Shrub Rose is known for its well-rounded form. Wonderful in mass or as an informal hedge, they also possess the other great qualities of the modern rose; hardiness, disease resistance, and continuous blooming habit. They are hardy from zones 5-10.

The Climbing Rose can be either an Old Garden Rose or a Modern Rose, the type is drawn from both groups. Old Garden Rose Climbers usually bloom only once a season, but are vigorous and hardy. Modern Climbers will rebloom as do their parents; the Hybrid Tea, Grandiflora, and Floribunda roses. These roses must have support to climb, either in the form of a trellis or fence and must be trained to the support structure.

The Polyantha roses are an extremely tough and hardy rose. The plant itself is low growing (usually not more than 24″) with lots of foliage, but they bloom so heavily at their height that the blooms can often make the foliage seem insignificant. Although they usually have no fragrance they have become an extremely popular rose. Also known as Fairy Roses.

Miniature roses are perfectly formed roses, but range in height from 3″ to 18″. They are hardy and rebloom easily, coming in all modern rose colors. Excellent for small gardens and containers.