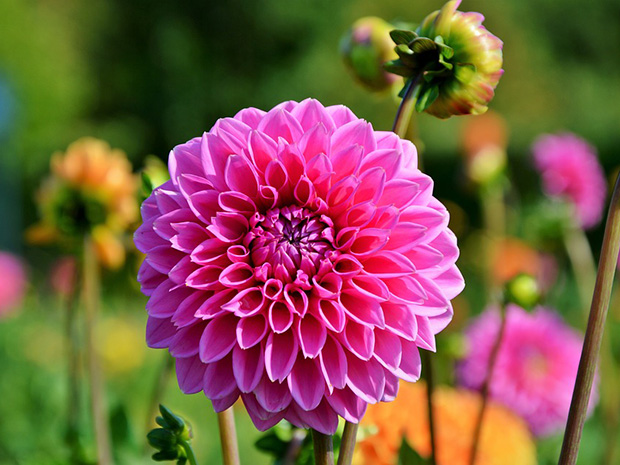 It’s unknown exactly when dahlias reemerged, hybridized and beautified, in North America. Originally from Mexico, the tubers eventually found their way to Europe. They spent a few centuries making the rounds in botanical and horticultural circles, and eventually made it back, transformed, to North American soil and become one of our most exceptional garden flowers. 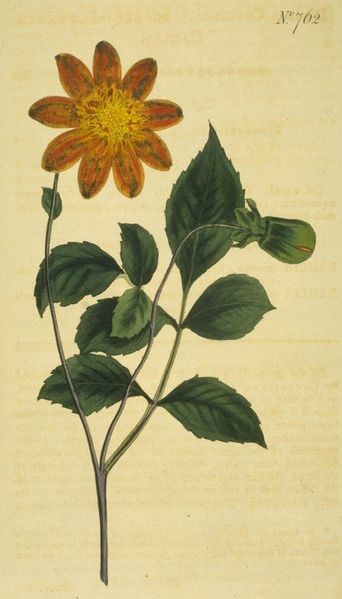 Scarlet-flowered Dahlia by S. Edwards, Sansum 1804. An example of an early dahlia.

Diversity is the hallmark of the dahlia flower. These impressive beauties not only range in height from 12″ to 8′, but their flowers can be anywhere from 2″ to 12″ across. The blooms can be simple with a single row of petals or hold rows upon rows forming a huge ball of color. You’ll find bi-color flowers, flowers resembling water lilies, flowers with curled petals, flowers with spidery petals, flowers with a combination of petal shapes and flowers that are just plain gigantic too. What makes dahlias so different from each other within the genus? Their genetic makeup is unlike most other plants. With more chromosomes and DNA sequences that are easily manipulated, they were ripe for hybridizing. The result is an enormous collection of wildly colorful flowers in a huge variety of forms.

In the Northeast, we can count ourselves lucky that dahlias grow from tubers. Since our climate isn’t temperate enough to leave dahlias in the ground through winter, we can still enjoy them with just a little added care. Planted in the spring after the last hard frost, dahlias bloom at mid-summer. You can get a jump on the season by planting the tubers up in containers first even if you’re transferring them into the ground later. Late March would be the time to plant up in containers.

Is it worth it? You bet!

These are on of my favorite flowers for so many reasons; big dramatic flower forms and color; they look amazing in containers; I can re-site them from year to year and garden pests rarely bother them. I hope I’ve persuaded you to try them!